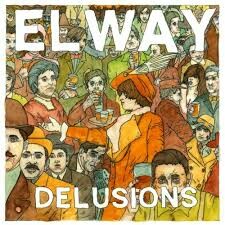 This young four-piece from Colorado roamed the basements and punk houses of America for a couple years as the band 10-4 Eleanor, and after building quite a following among the sweaty/bearded segment of the underground, they opted for a new band name and a fresh start in 2011. Thus ushered in the era of Elway, and along with it comes their Red Scare debut, Delusions. It marks an ambitious step up for the band as they ditched their home recordings and enlisted audio guru Matt Allison at Atlas Studios (Alkaline Trio, Lawrence Arms, LTJ, Smoke or Fire, etc) Rest assured, this new one retains all the guts and grime that these guys are known for, but with more intricacy and nuance than youd expect from your average beardo punk band. Delusions is thematically inspired by two things: our societys regard for God and having to deal with maniacal loved ones; and this brainy quartet is out to show the world how they do it out yonder in the Rockies * Red Scare.