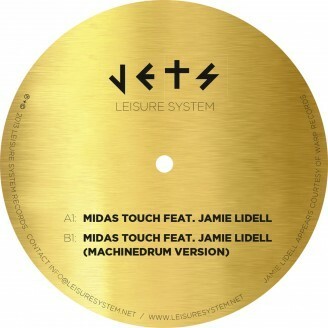 Jimmy Edgar and Travis Stewart (aka Machinedrum) reunite for a new and limited 12" on Leisure System, featuring vocals from chameleonic soul singer Jamie Lidell. "Midas Touch" debuted as the opening track on Machinedrum's Essential Mix in November 2013, but the track has been popping up at Leisure System gigs in various forms for the past six months. This 12" is only the second release from the JETS project following their self-titled debut on Leisure System, but as solo acts both Jimmy Edgar and Machinedrum had breakthrough years in 2013, the former launching his Ultramajic imprint and the latter releasing the Vapor City LP on Ninja Tune. The result of serendipitous recording sessions, "Midas Touch" will sound familiar to many but has been given a unique spin by the restlessly creative duo, buoyed by a powerhouse earworm vocal by Lidell. "Midas Touch" is a vinyl-only release featuring the original JETS version of "Midas Touch" and a shimmering Machinedrum remix that smoothes out the soulful track for the dancefloor.