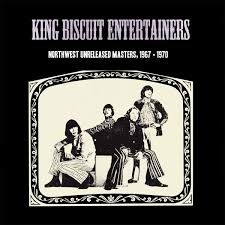 Featuring Ray Kennedy and Roger Huycke from legendary garage band The Wilde Knights (of ''Beaver Patrol'' / ''Just Like Me'' fame), King Biscuit Entertainers rocked the Northwest music scene between 1968 and 1971, building up a reputation as one of the better live bands from the Pacific Northwest Ballroom circuit. Along with releasing a bunch of 45s for several local labels, the band recorded lot of stuff at their own state- of- the art home studio which never saw the light of day. This retrospective features a selection from their unreleased tape archive plus rare 45 sides, 1967- 1970, including the fantastic garage- jangle 45 they recorded under the Genesis name. Music ranges from British influenced mod- psych to early hard- rock with stunning guitar and vocals. The raw sound and production brings to mind similar bands like Brain Police. *Outsider