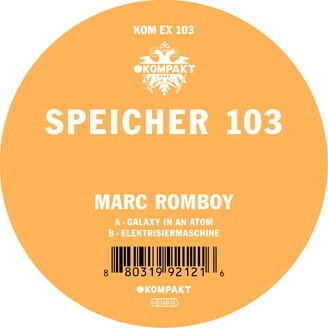 Unless you're too young to know or have been living under a rock for the past twenty years, there's little chance that you haven't come across Marc Romboy's music in one way or another. The Systematic Recordings boss has had many irons on the fire since establishing his first imprint, the now defunct Le Petit Prince - gathering an untold number of releases on labels as diverse as Ovum, Innervisions, Rebirth or 20:20 Vision in his two decades of intense activity. Tracing back to 1994, when he used to rummage through the crates of Delirium - the primitive incarnation of KOMPAKT (closed and revived under its new name in 1998), the friendship between Romboy and the KOMPAKT family has largely withstood the test of time. After losing touch for a few years, Romboy and Michael Mayer would resume contact during a festival in the south of France - a reunion that eventually led to Systematic joining Kompakt's distribution catalogue a couple months later. With such a longstanding complicity to build from, it was about time for the Rheinland natives to actually team up on a release from start to finish, and SPEICHER 103 is their inaugural act of faith. A cosmic storm in a teacup, the A-side opener 'Galaxy In An Atom' blows some furious stellar winds across a shape-shifting tide of loud kicks and mutant bass moves, beating across uneven arpeggiated synth reliefs through thick and thin. Then, the chaos makes way for emotive piano stabs to take over in the track's last third, gracefully gliding into a further appeasing compass. Following up pedal to the metal, the pulsating 'Elektrisiermaschine' makes for a proper peak time ball of fire. Built upon a rolling and pitching bass comber, the track sets its pistons and rods in dancing motion straightaway, tightening the bolts bar after bar as it expands its abraded melodic lines and batucada-like rhythms with amplified magnitude for over seven minutes of sustained mind-bending onslaughts. *Kompakt