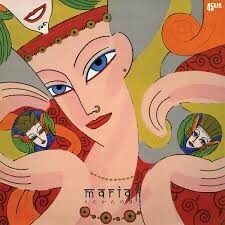 Klappcover, Obistripe. Mariah was a Japanese outfit in the field of art pop, way back in the very late 70s and early 80s with 5 albums up their score from 1980 to 1983. The album from 1979 entitled as "Mariah" was actually made before the band Mariah was formed, and was released as a solo album by Yasuaki Shimizu. The album at hand is the fifth and for the time being last album in this row, released as a double vinyl back in 1983. Original copies, that are at least in very good condition, are hard to find. The brand new reissue on Everland, unlike the original and the first vinyl reissue from 2015, comes housed in a thick and artfully designed gatefold sleeve with OBI, which finally does justice to the progressive spirit of the music you will find here. The musical basement of Utakata No Hibi is a fusion of dreamy synthesizer pop and haunting new wave music, that could be found all around the globe back in 1983. In the vein of Tears for Fears or more adventurous David Bowie stuff, with a touch of Kraftwerk or even Eno here and there, but all this gets spiced up with an atmosphere of Japanese traditionalism, with a few bits and pieces from the old music from this Far East island, which sounds so magic to us Westeners. The progressive, wacky art pop of this project was led by the popular Japanese composer and musician Yasuaki Shimizu, a relentlessly exploratory saxophonist who even dared to rework Johann Sebastian Bachs cello suites for saxophone. *Everland