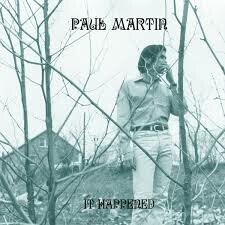 196667 garage anthems, jangly folkrock and baroque pop courtesy of prolific songwriter Paul Myerberg aka Paul Martin. "There a new man in town ? Martin!" So began the liner notes from the picture sleeve of his second 45 record in 1967. Actually, Paul Martin started life as Paul Myerberg. Growing up in Manhattan, Paul was influenced by the exciting music of the day, like the Rolling Stones and Bob Dylan. In the midSixties Paul started writing and recording some impressive demos which ran the gamut from garagepunk, to jangly folkrock, soulpop and baroque, orchestrated pop. Many of these were cut on 4track tape at Tower Sound Studios in midtown Manhattan with the help and guidance of the skilled jazz musician, Frank Owens. While at Tower, Paul met Herb Ostrow who released Pauls first single on the IMPEX label out of Philadelphia. "It Happened", a terrific garage number, came out in the spring of 1966. The following year, Paul released a second 45 on his own Rodin label, "The Last Remains of our Love" (another impressive, passionate garage gem), backed with "The Fairy Princess" (a dreamy poppsych track). Almost 30 years later Pauls first album was released on the Distortions Records label, compiling tracks from his two soughtafter singles plus studio demos and acetates. For many people, this was the first introduction to the music of Paul Martin, the man with a Brill Building inside his head. Now, we present a revamped version of that compilation, featuring new artwork, newly remastered sound, insert with rare photos / liner notes and one previously unreleased track from 1967. *Outsider