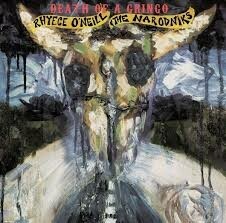 Death of a Gringo was recorded in a week live to tape: vocals, guitar, drums and bass all recorded live. Rhyece O'Neill taught Rick (bass) the songs a couple of weeks prior though Danny (drums) had never heard any of them until the day of the session. Once they had the right sound and were ready to go Rhyece would teach Danny and Rick the songs in the studio kitchen with an acoustic guitar. After a beer they were ready. They would go in and Nell (Engineer) would roll the tape. They never did more than three takes. Once a song was done they would go back to the kitchen, have another beer and learn another song. They recorded fifteen songs this way. *Beast Records