ROBBIE THE WEREWOLF – at the waleback 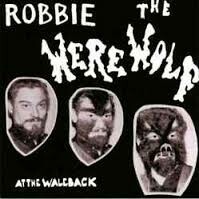 First ever vinyl reissue of this Incredible Strange Music, private press (infamous) classic, championed by lovers of the wonderful & weird such as Jello Biafra. A time capsule which will send you back to the postbeatnik, prepsychedelic / hippie scene from L.A. With his long red hair and matching beard, Robbie The Werewolf  a folksinger of the frantic variety with a fetish for monsters  was a striking performer with a manic stage presence, acting out his songs as much as singing them. His set consisted of his original songs and uniquely reworked versions of folk standards, played on a beatup twelvestring guitar. This inspired some of the most bizarre songs ever committed to vinyl: listen to "Count Dracula" and its protopsychedelic, amazing echo effects or the insane DIY rocker "Rockin Werewolf". It was at The Wale Back in L.A one heady night in 1964, that Robbies solo act was captured for posterity and released as a tiny private pressing. A few years later, Robbie was a founding member of L.A psychedelic band Clear Light. But thats another story?