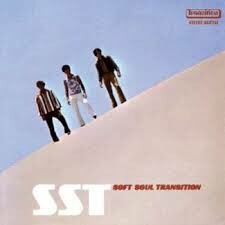 Breezy Sunshine-Pop / Soft-Rock / Psych-Pop from California, 1970, featuring Peter Clark a.k.a Chet DeMilo. Crystal clear recording, awesome vocal harmonies, superb musicianship, bossa & blue-eyed-soul-jazz touches,folk-rock moves In 1969 Chet Demilo was appearing at Donkin's Inn, Marina Del Rey, where he met Arnie Marcus and Ray Hames, who together were to become part of an incredible slice of history. Donkin's became the hottest and most famous destination in Southern California for the next seven years, and Chet was the magnet that started the new singles scene in Los Angeles with Marina Del Rey as ground zero. Arnie sat in on bongos with Chet from time to time, and Ray, who was managing an apartment complex that housed 200 flight attendants, just happened to have a unit available!! Chet moved in, and he and Ray started working on songs together. Chet suggested forming a vocal group with Arnie and SST was born. For three months they practiced the intricate vocal harmonies and in early 1970 cut the album, "Soft Soul Transition". A thousand records were pressed, and an album release party was held at Donkins where SST gave their one and only performance that night! There was interest in the project at Burt Bacharach's Blue Seas Music, but it was not to be and SST faded away...until more than 20 years later when the SST album was discovered by a new generation of DJs and collectors looking for cool and groovy sounds from the 60s-70s. *Outsider