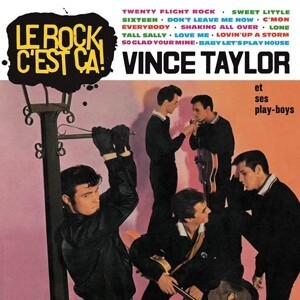 Vince Taylor is the stage name of Brian Maurice Holden, leader of the legendary Playboys. Though a British native, Taylor went to high school in Los Angeles and began his career there managed by Joe Barbera, of the legendary animation studio Hanna-Barbera, who was his brother-in-law. Though he started performing in the USA, it was on a trip back to London that he met the players who would become the Playboys, and it was in France and the rest of the European continent that Taylor found most of his success. Inspired by the likes of Elvis and Gene Vincent, Taylor brought rockabilly to Europe in a major way. This reissue on Rumble features his legendary debut 10" album + an entire side of bonus tracks culled from early singles compiled together on one deluxe LP of classic early rock'n'roll. Dig. *Rumble