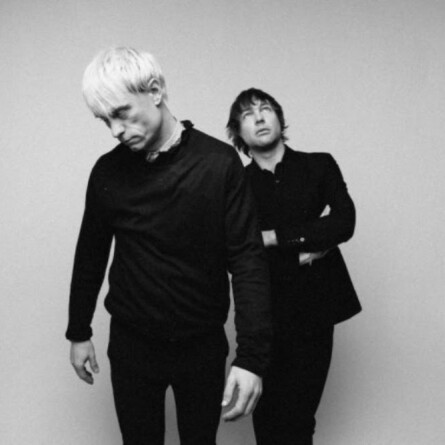 Don Devore formally of Ink and Dagger/Icarus Line/Sick Feeling/Lilys and Reggie Debris are Collapsing Scenery. Formed in 2013, this is their second release. They toured with Tamaryn in May and Psychic TV in August of 2016 and have since been on fantastic bills will the likes of James Chance & the Contortions, Cappadonna of Wu-Tang Clan, and Big Pink. They are currently recording with James Chance as well. Don De Vore and Reggie Debris created a political song for the dancefloor with this new single, "Straight World Problems." It's basically about taking a reality check and not being overly idealistic. Debris says, "Dreaming of an unattainable, ideal future only leads to misery and disengagement when that future fails to materialize." The song concerns "the awful frequency with which new regimes and new systems mimic the worst qualities of those they replace." While the content may be a bit heavy, musically the guys use their favorite analog gadgets to create a dizzying, fun club track, making it easy to dance away your political anxieties. EP mit dem Song und 5 Remixen. *Metropolitan Indian