DITCH AND THE DELTA – the hives in decline 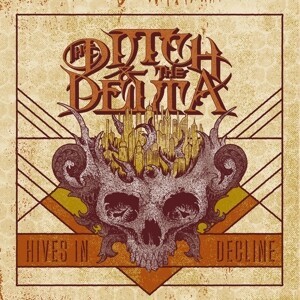 'Hives In Decline' the colossal debut album from Salt Lake City's THE DITCH AND THE DELTA. A lurching mammoth riff monster trio, hammering their doom chords with a DC driven rhythm and an angular noise-rock intensity.A rare jewel of an album. Lazy reference points to get you started / RIYL - Kylesa, Fugazi, High On Fire, Don Caballero, Red Fang, early Mastodon... The Ditch and the Delta formed out of three friends of nearly 15 years. While Elliot Secrist (guitar/vocals), and Charles Bogus (Drums), have played in bands off an on over that span of time, it was the addition of Kory Quist (Bass/vocals) that solidified the band and their sound. The band is often lumped in the doom category but their sound is most often described as sludgy math rock, "Neurosis as a stripped down, noise rock outfit" (noecho.net). The sound is huge an oppressively heavy. According to Hellbound.ca the sound is an amalgam of Doom, noise, and progressive metal; comparing the band to The Melvins, Eyehategod, Intronaut, Fugazi and Godflesh in the same review. The devil is in the details with The Ditch. The expanded harmony and tension, as well as the unique rhythms are, in part, due to Secrist's studies and degree in Jazz Composition. The band calls their brand of sludgy/noise/doom, "Big Riff". Employing different tunings, and modal centers, every song The Ditch writes manages to avoid many of the usual doom trappings of excessive feedback, static harmony, and pentatonic riffs. *Prosthetic