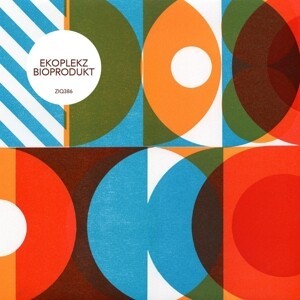 4tes Album! The unique lo-fi, woozy sound of Bristol's Nick Edwards stays intact while he veers towards the nineties for inspiration: the bleep and bass sound of the north of England is one touchpoint and the acid gurgles of the 303 are another. While the murky lo-fi production levels and evocative melodies remain, they are now bolstered by a more muscular rhythmic chassis. Snappier kicks and snares mingle with dense layers of percussion and deep undulating sub-basslines adding a funkier edge, as typified by opening track "Elevation" where playful beats interlock with breezy keyboard flourishes to create something uncharacteristically upbeat. Similarly, the gentle, fluid motion of "Slipstream" and "Calypzoid" represent some of the most appealingly chilled grooves in the Ekoplekz canon to date. But the darker-edged material remains. "Expedition" has a pensive, percussion-heavy feel whilst "Acrid Acid" is a dirt-encrusted slow-mo techno meltdown. "Transcience" displays the Ekoplekz trademark dub-fx in full flight over a driving lo-end, before "Descent" leads down to the final section, where the beats fade out, replaced by rippling layers of spectral ferric ambience on the epic "Low-X Over", before finishing with the radiant looped stasis of "Denier Daze". The albums shifting, imperfect patterns and muted colours are visually mirrored in the beautifully realised sleeve by the Print Project. *Planet Mu