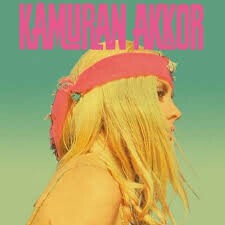 Turkey's recent musical history is littered with bottled blondes who put on a lot of eyeliner, made a few singles & then disappeared. And since the mid- 1970s, those twin queens Ajda Pekkan and Sezen Aksu have maintained a semi- rivalry while bulldozing their way over pop charts & sales counters. Piles of Turkish psych & folk reissues have hit the west over the past few years, and yet how many have given the luscious ladies of Anatolia their due? So go beyond Selda, and get your gal power on. It's time to steam up your windows with this foxy arabesque singer who's a real- life Stevie Nicks next- door. Waka waka funk rhythm guitar, sweet little organs, pumping bass, winging & buzzy synths, electric baglama, syrupy disco strings, and Akkor's little swallowed yodels... It's all here on Istanbul Plak singles released from 1971- 75. Whether she's covering European hits that have Turkish lyrics retrofitted, or ghost voicing a musical scene in a high- profile movie, Akkor often sings like outbursts of tears or frenzy are just beyond her words. And seeing how she always played second fiddle to her classier, more famous sister Gönül, maybe Kâmuran just felt like a little drama was in order, mmm? You might have caught a couple of scant cuts on compilations like ''Turkish Freakout Vol. 2'' or ''Istanbul 70'', but there's way more to discover, and now you can. *Pharaway