MONOCLES & HIGHER ELEVATION – the spider, the fly and the boogieman 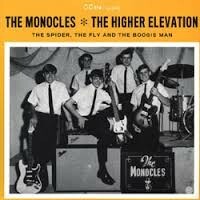 Most people were introduced to the bizarre psychedelic sound of The Monocles (later The Higher Elevation) thanks to the inclusion of the bizarre ''The Spider & The fly'' and ''The Diamond Mine'' on the legendary Pebbles Vol. 3 (the ''acid- punk'' volume). These youngsters from Colorado formed in 1964 and they were famous for driving to gigs in a custom Cadillac hearse. Between 1965 and 1968, they released a bunch of singles for different labels: Chicory, Denco, Liberty. This retrospective collection includes the best of their 45 sides plus some previously unreleased on vinyl tracks. *Outsider