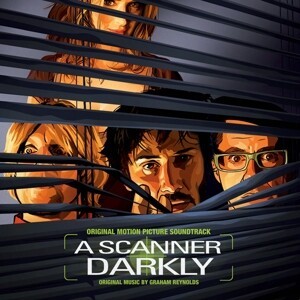 Under license from Lakeshore Records. A Fire Records release. The Soundtrack: "Strands of post-rock, electronica, jazz, and vintage rock are woven and recombined throughout the album for unusual juxtapositions." - All Music Graham Reynolds works in extremes; Short take moments of sound - whether it be a surf-like instrumental, a country-tinged breather or the sound of stuttering insects crawling through your hair - are all in his tick box. The music for "A Scanner Darkly" is bold and uncompromising, shifting as it moves through genres and sounds. The soundscape is itchy and scratchy, full of mood swings and musical metaphors, an ever changing and unpredictable set of highs littered with reflective undertones and occasional soft, almost super numb realities. Back in 2006, Richard Linklater's film adaptation of Philip K Dick's sci-fi novel A Scanner Darkly was greeted with suspicion. No one had done justice to the "master" (Bladerunner, Minority Report, Total Recall, The Adjustment Bureau had or have all met with mixed reviews). And, movies attempting to conjure up the effects of drugs were met with derision from the stoned cognoscenti. How could a story of dependence on Substance D ("Death" for short) be created with multi-million dollar stars in the frame anyway? Linklater had a plan; He'd use rotoscoping (an effect that falls somewhere between Kiki Picasso's sketches brought to life and Disney on 'ludes). The celebrities would be shrouded in mystery, in fact Keanu Reeves' skin suit would make him almost invisible at times, a mumbling wreck swaying centre stage. A waste of talent? A waste of money? To complete the experience, a left field musical score was needed to ensure that everything wasn't as it seemed. The phone books are full of creative composers but Graham Reynolds And His Golden Arm Trio jumped off the page. The band name is from a Frank Sinatra film where he plays a drug-addled muso. Perfect. *Fire