ROB HERON & THE TEA PAD ORCHESTRA – soul of my city 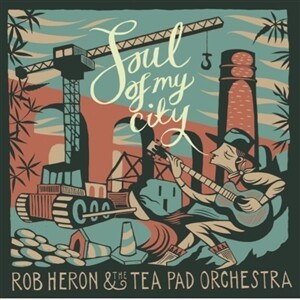 The fourth studio album is the result of fine-tuning their blend of Swing, Rockabilly, Blues and Country, into a sound that is truly unique, witty, hip, and successfully brings these older styles of the music into the 21st Century! The songs cover themes as eclectic as the style, such as cross-dressing, time-travel, being skint and of course, heartbreak. The title track and cover artwork are a response to the over-gentrification of creative areas such as Newcastle's Ouseburn Valley, where artists create a unique environment only to later have developers jump in and destroy it_ a problem faced by towns and cities the world over.For fans of: CW Stoneking, Pokey LaFarge, Kitty, Daisy & Lewis, Kansas Smitty's House Band. *Tea pad rec.