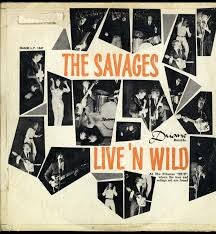 This album all in all is absolutely rare. It is hard to find any original copy at all. But here we go with a brand new reissue that brings back the original album to a garage beat loving audience. Strangest point here is the song He's a man, a cover version of Icelandic 60s rockers THOR'S HAMMER with lyrics in English written by THE SAVAGES. We gotta get out of this place by THE ANIMALS was quite an obvious choice for a young garage band to include in their live set, the third cover version on this album is a more powerful rendition of THE DRIFTERS' On broadway. Nice choices but only the icing on the cake for the self penned tunes presented a band that was up on the same level as most of the more popular garage beat heroes of the day and with The world isn't round, it's square THE SAVAGES had written one of the most wicked proto punk orgies of their era that became one of these cult tunes that are the reason a band survives in the memory of at least a few die hards over the decades and it still sounds fresh and furious while the great Quiet town for example is an early psychedelic pop tune. The overall mood of this record is certainly joyful but you can feel the teenage angst and anger of these youngsters streaming from every note of their songs. I suppose if they got hold of a fuzzbox already all their guitars would have been utterly distorted but even with no distortion on their axes there is enough dirt here to make Live'n'wild an ultimate experience in 1960s garage rock on par with THE SEEDS, THE MUSIC MACHINE or THE SORROWS.*Twitchin Beat