SYDNEY PADUA – the thrilling adventures of lovelace and babbage 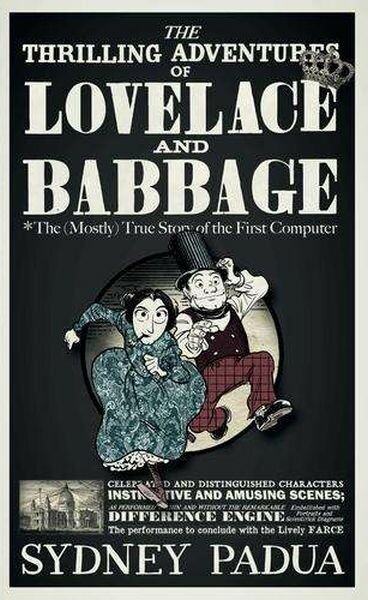 Gebunden, 309 Seiten (240 x 177 mm), Sprache: Englisch. In The Thrilling Adventures of Lovelace and Babbage Sydney Padua transforms one of the most compelling scientific collaborations into a hilarious set of adventures. Meet two of Victorian London's greatest geniuses... Ada Lovelace, daughter of Lord Byron: mathematician, gambler, and proto-programmer, whose writings contained the first ever appearance of general computing theory, a hundred years before an actual computer was built. And Charles Babbage, eccentric inventor of the Difference Engine, an enormous clockwork calculating machine that would have been the first computer, if he had ever finished it. But what if things had been different? The Thrilling Adventures of Lovelace and Babbage presents a delightful alternate reality in which Lovelace and Babbage do build the Difference Engine and use it to create runaway economic models, battle the scourge of spelling errors, explore the wider realms of mathematics and, of course, fight crime - for the sake of both London and science. Extremely funny and utterly unusual, The Thrilling Adventures of Lovelace and Babbage comes complete with historical curiosities, extensive footnotes and never-before-seen diagrams of Babbage's mechanical, steam-powered computer. And ray guns. Sydney Padua is an animator and visual effects artist, usually employed in making giant monsters appear to be attacking people for the movies. She started drawing comics by accident with the webcomic 2D Goggles or The Thrilling Adventures of Lovelace and Babbage and is still trying to figure out how to stop. Originally from the Canadian prairie, she now lives in London with her husband and far too many books. *Penguin Books