WILL ROMANO – mountains come out of the sky ... 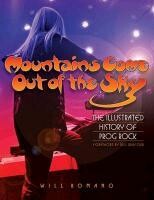 Achtung, Lieferzeit mindestens 10 Tage * The Illustrated History of Prog Rock. From its artful beginnings (Syd Barrett-era Pink Floyd, the Mothers of Invention, and those progressive forebearers, the Sgt. Pepper-era Beatles), through the towering guitar solos, monumental synthesizer banks, and mind-boggling special effects of the Golden Age of Prog (Rush, Pink Floyd, Yes, ELP, Genesis, Jethro Tull, King Crimson, UK), through the radio-friendly "pop era" (Asia, the Phil Collins-led Genesis, and a reformed Yes), and right up to the present state of the art (Marillion, Spock's Beard, and Mars Volta), this is a wickedly incisive tour of rock music at its most spectacular. This is indeed the book prog rock fans have been waiting for, the only one of its kind, as fantastic as the subjects it covers. 246 Seiten * Backbeat