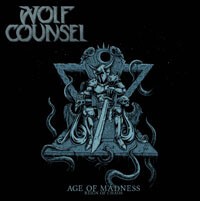 Originally a brainchild of the 1990s Wolf Counsel finally came into existence in 2014 when two veteran musicians merged their enthusiasm for monumental low-tuned music and a great appreciation of heavy riffs into a new band. Primarily rooted in the style of late 70s and 80s prototype DOOM Metal their sound quickly developed a unique and heavy signature drawing influences from everything that's HEAVY and SLOW. In January 2015 the debut album "Vol. I - Wolf Counsel" was released digitally, on vinyl LP and CD by Counsel Records and Dead Center Productions. * Czar of Revelations